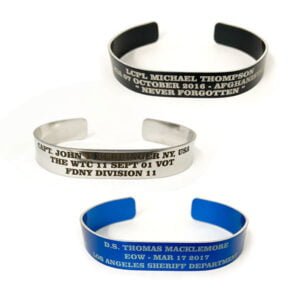 The origin of the mourning armband isn’t clear. But, this practice shows up throughout history. Many cultures have used it to remember the deceased.

The black mourning band was traditionally worn on the left upper arm and made of fabric. Possibly one of the first documented cases of its use is seen in a portrait from 1614 of Princess Elizabeth Stuart, later, Queen of Bohemia. The portrait depicts her wearing the black armband. The belief is she wears it to honor her deceased brother, the Prince of Wales, Henry Frederick.

Note that mourning jewelry became popular as well. With the passing of her husband, Prince Albert, in 1861, Queen Victoria spent the following four decades wearing black crepe dress and mourning jewelry. Her popularity made it quite fashionable, prompting aristocrats and the wealthy to commission bracelets, rings and lockets memorializing their deceased loved ones. This jewelry commonly incorporated black enamel, jet, onyx and other dark or black materials. Also, it included the name of the deceased and sometimes locks of their hair.

Post Victorian times, the black armband, instead of mourning attire, became more popular in the U.S. The high cost of a whole wardrobe of black mourning clothes was impractical. During the Great Depression, even more so.

Into more modern times, the black mourning band, worn on the upper arm, faded in use for the most part. However, sports figures and law enforcement wear it to honor the passing of one of their own. And, occasionally its seen worn in protest.

Aside from mourning jewelry, popularized by Queen Victoria, it’s likely bracelets memorializing deceased loved ones were and are popular in other cultures.

However, the metal cuff bracelets of the 1970’s are clearly the inspiration for our memorial bracelets popular in the U.S. today. 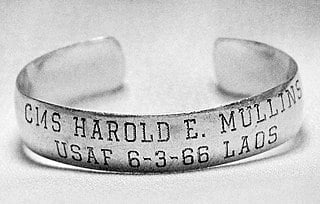 These bracelets of the 1970’s were created as a campaign to bring attention to the prisoners, missing and unaccounted for of the Vietnam war. The nickel-plated and copper POW/MIA bracelets were created to be worn until the soldier was found and returned home. Many wearers were dedicated and loyal to this end, as you can imagine.

Then, in 2001, came the horrific event known as 9/11. The tragic loss of family members and first-responders on that day devastated U.S. Citizens and others around the world. This sad event later inspired the creation of memorial bracelets to honor and remember those that were lost.

From that time forward, memorial bracelets have continued and grown in use. Today we create and wear memorial bracelets to honor and remember our soldiers lost or injured in recent or past service, as well as our police officers, firefighters, family members and others. In addition, we often wear them to bring awareness to causes, and even to celebrate events.

POW/MIA bracelets of the 1970’s were stamped with the soldier’s name, rank and the date that person was captured or went missing. Today’s POW/MIA/KIA memorial bracelets list the rank, name, branch of service, event date, and the location of the event. In addition, the ends of the band feature the soldier’s state abbreviation and whether they’re a POW or are MIA.

Although color can just be a matter of preference, often the significance of the bracelet’s color and the abbreviations on it are as follows:

Inland Products is humbled and honored when asked to assist in our clients’ efforts to memorialize those that have been lost. So, if you or your organization require memorial bracelets, either blank or engraved in bulk, please see our Memorial Bracelets page for more information and links to our products. Additionally, please call us or email us with any questions you may have.

I made an order of custom sheet metal items for my side business with my logo. And when I got it it had no logo so I was disappointed. I had thought that I uploaded my image to their website and ordered it. But because I guess I took so long to upload it, when I placed the order the original page had expired and the logo didn’t upload. I was sad. I emailed them and they said that they would charge me the same amount for blanks and not charge me for the logo to try to rectify the matter. I was very happy with their solution and also for their response time. Steve at Inland Products was very kind to do this. And his customer service is in the 90th %tile of anyone I have dealt with. Thank you again!

Very Satisfied for Over 20 Years

“Inland Products has been making our metal nameplates for over 20 years now and I am happy to give them my testimonial as a very satisfied customer. They are always very responsive to our needs and have helped us out of many jams when we really needed the help. Consistent quality and great customer service make them very easy to work with.”

Works Hard to keep Us Happy

“This is a company that works very hard to keep us happy and to earn our continued business. I wish I could say that for all of our vendors.  Thank you Inland – Terry King”

Fast Service and Very Accurately Made

We use this company to make brass labels for our high end telescopes. Fast service and very accurately made.

A+ and then some!

Was a pleasure working with Steve from Inland Products. My company is a Sub Contractor out of NASA, performing work on the Orion space vehicle. We needed metal ID tags for our tools/equipment, and Steve gave prompt responses to my inquiries, and even offered stellar ideas. We had a tight turnaround schedule for these, and Steve managed to get them to us a day early! The tags came out looking fantastic, with our company logo laser etched into shiny blue metallic aluminum plates. The materials used were top notch, and the plates are very solid, and thick. These will most definitely stand the test of time, and abuse that our spacecraft technicians throw at them! Will most definitely be placing future orders with Inland Products through Steve. Thank you guys so much!!! A+ and then some!

Great workmanship and perfect product for our needs! Inland was able to re-create brass plates that where discontinued by the original manufacture, and at a very reasonable price. Customer service was prompt and helpful!

Inland Product performed a fabulous job on my order. I will be a repeat customer.
-M

Customer satisfaction was their top priority. Cyndi was very helpful, friendly, and professional. I am pleased with the tags and would highly recommend them!

I’ve been a regular customer of Inland for many years and have always had the most favorable experience when ordering merchandise from them. Cyndi is the best, bar none, of taking care of business. Thank you.

The products Inland Products makes are top-notch and very professional looking. I use the tags on the dog collars and leashes I sell through my website and Etsy shop. The tags are durable and the etching does not wear off. The edges of the tags are finished and smooth and so are the pre-drilled holes. I have tried one other vendor, but was so dissatisfied with the tag I threw them away. Keep up the good work Inland Products!

There must be a new change in management since the last reviews or something, because the customer service has been outstanding. I have been dealing with Cindy for several months and since the first day she has never failed to deliver.

Welcome to our new website!
To find what you’re looking for, use the grey menu bar below, or
click on the magnifying glass to the right on the black menu bar and enter a product description or part number.
If you need help, use the chatbot at the bottom right, or contact us.
Thank you for choosing Inland Products!
See our Lead Times and other important information on our Terms and Conditions page.
Dismiss